I’ve always had a soft spot for Glasgow where my daughter Lilia spent four happy years at university, so I was very happy to jump on a train and head north for a few days.

It’s a tremendously creative city with a lively music and design scene that I always find inspiring for my made-to-measure designs for Alice & Co. 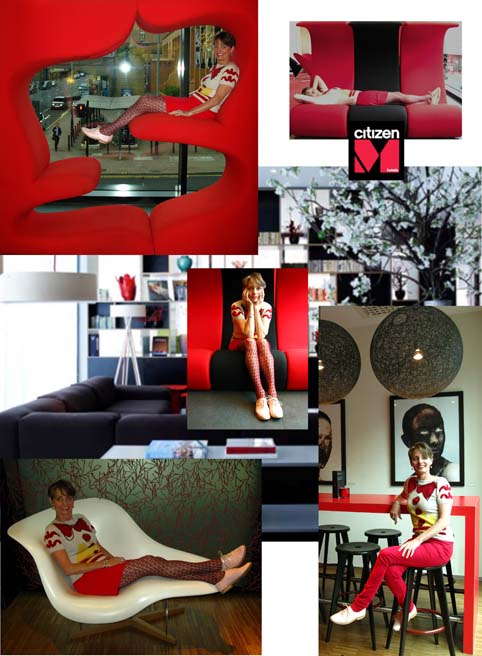 …where an Antonio & Alison sweater and an Alice & Co red jersey mini skirt goes well with the bright and funky CitizenM decor.

This fast-growing Dutch hotel group has gone for a winning concept of compact rooms with matching prices but no stinting on the quality with king-size beds, soft Frette bed linen, free movies, cheerful staff and plenty of interesting places to put your feet up!

Or at the Blythswood Square Hotel

…for some old school glamour. The five-star Blythswood Square Hotel used to be the headquarters of the Scottish Automobile Association and is appropriately decked out with motoring photos and furniture upholstered with smart Harris tweeds. The bar is a fine place for a cocktail before hitting the town.

I was very tempted to whip up a little jacket from the smart purple and grey herringbone curtains in my room.

Perfect for hanging out in the stylish lobby, try some Alice & Co crepe trousers matched with a John Smedley sweater and a Beauchamps of London clutch bag.

In Scotland they usually wear their pom poms on their bonnets – I prefer mine on my toes.
These purple ones were made by Cleo B, she also makes sparkly rosettes to clip on to your footwear.
It’s a smart and affordable way to ring the changes on your footwear. Here’s some plain pairs of M&S court shoes transformed into Cinderella slippers – magic!

I met Cleo B and Alex Fagan in London at an Andaz Hotel Liverpool Street salon event, which showcases upcoming designers with an East London connection.

They’ve collaborated to create WOOF! which makes smart collars and leads for the pooch about town.

But I wasn’t just in Glasgow to stand around looking glamorous.
I was there to rock and roll.

So it was off to Bellahouston Park to see Kings of Leon.  It was part of the new annual Glasgow Summer Sessions of music events that will be held every August. The rain held off – just – and the Tennents lager was flowing so the crowd were an enjoyably crazy lot.

Glasgow is on a roll at the moment: it’s one of only five to cities to be named as a Unesco City of Music

and they’re hosting the Commonwealth Games next summer. They’ve built some spanking new venues, including the massive SSE Hydro, nicknamed ‘The Pie’, which will be opened by a Rod Stewart concert, and the Sir Chris Hoy Velodrome – an indoor cycling track where you can don your lycra and take a trial spin for a tenner. A good way to explore the city centre is to dance your way around the Glasgow’s famous music venues on a Walking Heads audio tour. You can download the maps, commentary and soundtrack to your smartphone and learn about everywhere from the Panopticon music hall to King Tut’s Wah Wah Hut. Genius!

Route 3 includes the famous Barrowland Ballroom where all the big names from David Bowie to Manic Street Preachers have played. 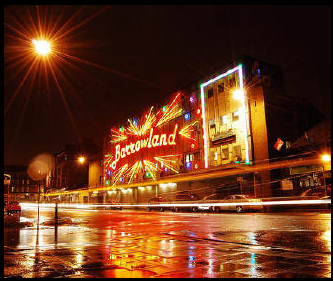 Originally built by Margaret McIver, an entrepreneuress extraordinaire, it’s next to her famous Barra market in the East End, and was originally created so that the market traders would have somewhere to party.

A splendid idea in my opinion – there should be more dancing in the world.

There’s no shortage of delicious places to eat in Glasgow. Here are my favourites…

Crabshakk serves all things fishy from the west coast of Scotland, from a ‘wee fish supper’ at £7.95 to the full fruits de mer at £70.

My squat lobsters and wild sea bass with almond butter are definitely going on my memorable meals list.

They describe their concept as ‘trying a little, tasting a lot’ – and it was all so good I just ended up eating the lot!

The Ubiquitous Chip has been going since the 1970’s and has a rather Californian feel, a very sophisticated menu and highly skillful cooking.

Now it’s the game season this could be just the place to eat some grilled haunch of Carsphairn roe deer with ‘hot pot’ potatoes and a caraway and rosemary salsa.

Brazen in the Merchant City quarter is a well-established contemporary jewellers with a dark interior showcasing Scotland’s brightest new designers.
You can buy a dear little vintage charm on a silver chain for £30, commission a unique engagement ring, or if you’ve just won the lottery blow £75,000 on some emerald earrings.
They also have some funky silk scarves – I was rather taken with this one by Helen Ruth.

Glasgow School of Art has had the good initiative of setting up a shop with items produced by students, staff and past graduates. 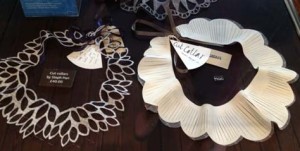 Sticking with my accessories theme, I liked these dainty collars which are perfect for traveling light and instantly zizzing up a plain sweater.

For gifts to take back, check out these cheerful pinnies and tea towels by Gillian Kyle printed with marshmallow tea cake wrappers from the famous Glasgow biscuit makers Tunnock’s.

After all that urban frenzy it was time to get back on the train and head west to the wee isle of Eriska for a weekend of Scottish baronial splendour. You can read about it very soon.

Find out more about Alice & Co made to measure outfits and Alice’s traveling bug here.

What to wear around the world